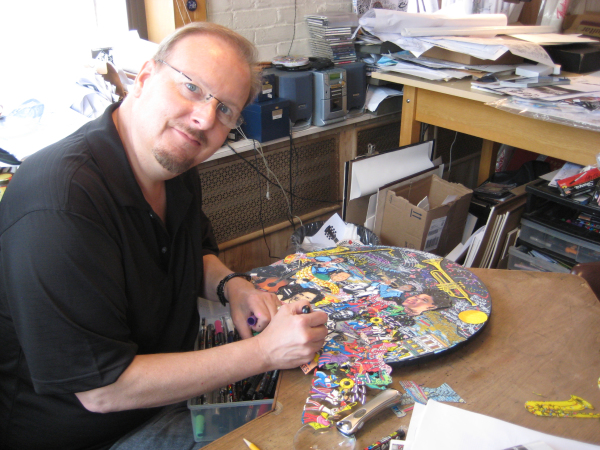 POP ARTIST AND POP CULTURE HISTORIAN, WE CATCH UP WITH THE TALENTED ARTIST FROM NEW YORK : CHARLES FAZZINO

In the second part of our interview with Charles Fazzino he talks to Liz Champion about his career highlights and how it all began.

Charles Fazzino is often referred to as a pop culture historian. He’s famous for his innovative style and technique, and has even been called a master story teller, using his style, technique and sense of composition to capture everyday life.

Fazzino grew up in a suburb just outside of New York, and with both his parents being artists it was perhaps inevitable that Fazzino developed a love of art.

“Both of my parents were artists so they influenced me a lot,” says Fazzino. “My father was a shoe designer and my mother was always doing different types of arts and crafts. She used to do outdoor shows when I was little and eventually, I started doing some of them with her with a few of my paintings. I was lucky to have parents who supported the arts. Not many parents would be happy if their child came home and said ‘I want to be an artist!’”

Fazzino was always drawing as a child. After graduating high school, he completed a degree in art at the School of Visual Arts in New York City. “After that, I just started exhibiting my works in all outdoor fairs and eventually the art galleries discovered my work and started showing it and everything just kept going from there to where it is today.” 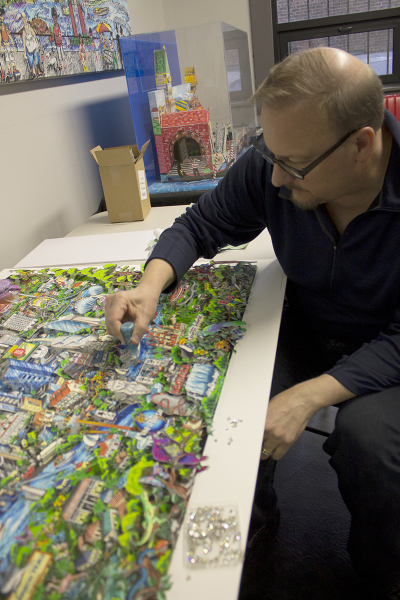 It’s fair to say that Fazzino has had a fantastic career, with a loyal following throughout the United States, Europe and Asia. His artwork can be found in the private collections of Presidents Bill Clinton and George Bush, Rosie O’Donnell, Morgan Freeman, and Sir Paul McCartney – to name just a few. Fazzino is just grateful for being fortunate enough to follow his dream.

“Every day is a highlight for me,” he says. “I’m so lucky to have been able to pursue my dream of being an artist, do it every day and have the work so widely accepted by so many people. I guess there have been some special moments too. I loved being the official artist for the 2004 GRAMMY Awards. It was an electric evening and I met so many of my own idols. There was also acting as the official artist for the Pori Jazz Festival in Finland. It was the first time my art was shown in my mother’s native country, Finland, and she went with me for the show. The President of Finland even showed up to see my exhibit! And of course, my first major museum exhibition in Fort Lauderdale, Florida was a real thrill. That was at The Museum of Art/Fort Lauderdale when I was named the official artist for Fort Lauderdale’s Centennial Celebration…and of course, debuting my work in Singapore is a huge highlight for me!” 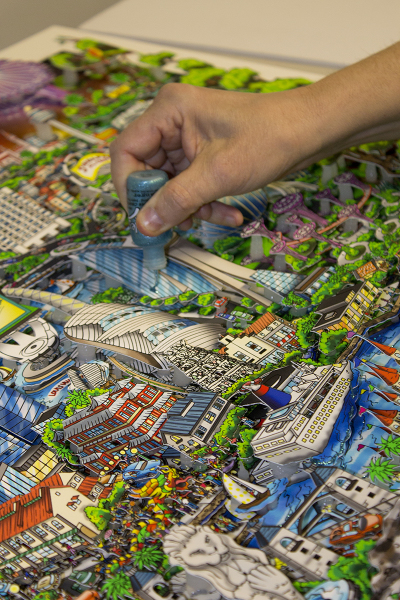 Fazzino is famous for creating 3D Pop Art, something he puts down to his childhood.

“I always loved 3D things,” he says. “My mother gave me a lot of pop-up books when I was a kid and I was fascinated by them.”

It wasn’t until Fazzino hit the road doing outdoor art shows in an attempt to promote his work that he realised the potential of 3D art.

“With regards to my own art, after I graduated from the School of Visual Arts in New York City, I started driving up and down the east coast of the US doing outdoor art shows. One day, I went into an art supply store in Florida to buy some things. They were giving a class in an art form called paper tole. I took the class and went back to my own work, made some copies of one of my pieces and cut them out and layered them like in paper toling. I showed them at my next outdoor art show and NONE of my other works sold…only the 3D…so I knew I was on to a good idea.” 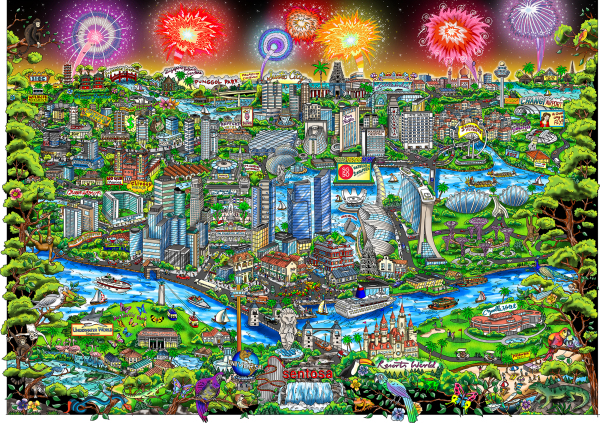 Since then Fazzino’s work has gone on to be exhibited around the world. This month he’s in Singapore with a new exhibition to celebrate the 50th anniversary of independence. Fazzino said he wanted the artwork to capture everything that is special about Singapore. As well as the new collection, Fazzino’s other works including the famous New York City creations are on display. Some of his work has been said to embody a virtuous American Dream, but Fazzino says he has never thought of it this way.

For more information on the exhibition visit http://www.brunoartgroup.com/