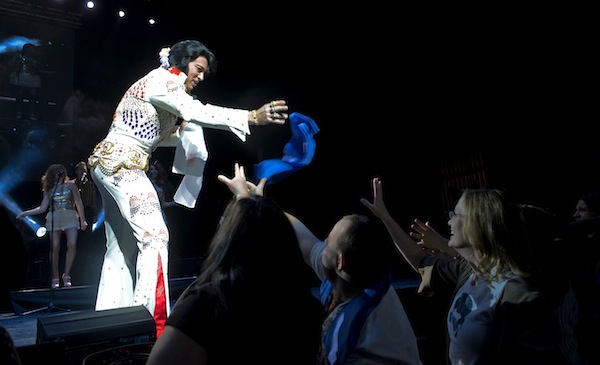 LEGENDS IN CONCERT FEATURING THE ULTIMATE TRIBUTE TO ELVIS AT THE MASTERCARD THEATRES, MARINA BAY SANDS

The King of Rock & Roll is coming to Singapore this April! Direct from Vegas, the hit theatrical concert “Legends in Concert” featuring The Ultimate Tribute to Elvis will be performed for the first time ever at the MasterCard Theatres, Marina Bay Sands for a limited number of performances only from 2 April to 5 April 2015. Tickets are now on sale.

“Legends in Concert” featuring The Ultimate Tribute to Elvis is an unforgettable multi-media and live musical journey representing Elvis’ life during different stages in his career. His iconic style, which continues to intrigue audiences of all generations, will feature winners from Elvis Presley Enterprises’ (EPE) annual worldwide Ultimate Elvis Tribute Artist Contest. The Elvis tribute artists will be joined by a live band, back-up singers and dancers, along with an Ann-Margret tribute artist.

This high energy show will feature the Ultímate Elvis Tribute Artist Contest winners, Bill Cherry (2009), Dean Z (2013) and Jay Dupuis (2014) as the principle cast for the Singapore season of the show. Audiences will be transported back in time when they hear over 30 of Elvis’ greatest hits, including Jailhouse Rock, Blue Suede Shoes, Love Me Tender and Can’t Help Falling In Love in this world class show.
The Ultimate Elvis Tribute Artist (ETA) Contest was first launched in 2007. Elvis Presley Enterprises announced their inaugural event to find the “best representation of the legacy of Elvis Presley.” Twenty-four of the best ETAs from around the world traveled to Memphis during Elvis Week 2007 to compete for this honourable title. In response to the excitement generated by the 2007 contest, Elvis Presley Enterprises has brought the Contest back every year since.

An unrivalled American pop culture icon, Elvis Presley dominated the rock music charts during the 1950s, 1960s and 1970s before his untimely death in 1977. As a musician and actor Elvis Presley rose to fame rapidly on radio, TV and the silver screen and continues to be one of the biggest names in rock ‘n’ roll. On January 8 this year Elvis Presley would have celebrated his 80th birthday. His legacy includes 108 songs on Billboard magazine’s Hot 100 pop music chart as well as 129 records in the Billboard 200 album chart, most recently in 2002 with a greatest hits set.

Date: 2 – 5 April 2015
Venue: Sands Theatre, MasterCard Theatres at Marina Bay Sands
Cast: The tour features a cast from the US

TICKET PRICE: From $60
* Excludes the booking fee of SGD$4 per ticket