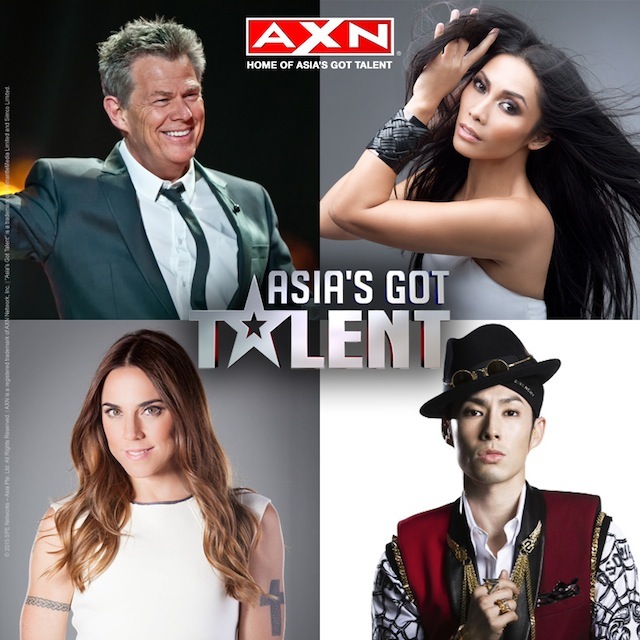 BILLED AS THE BIGGEST TALENT COMPETITION IN THE WORLD, AXN ANNOUNCES “ASIA’S GOT TALENT’ JUDGES

It’s coming to screens across Asia in March and Asia’s Got Talent is the largest version ever of the ‘Got Talent’ franchise to date.  Earlier this month, AXN announced the celebrity judging panel who would face the job of selecting Asia’s most jaw-dropping, mind-blowing and breathtaking performances.

Meet the Asai’s Got Talent Judges:-

She released her first album at the age of 12 with the hit single ‘Mimpi’ being recognized as one of the ‘150 Greatest Indonesian Songs of All Time’ by Rolling Stone Magazine.  Her International Breakthrough came in 1997 with ‘Snow on the Sahara’ being released in 33 countries worldwide (topping the charts in Italy and Indonesia.  Anggun is also a judge on ‘X Factor Indonesia’ and ‘Indonesia’s Got Talent’.

David Foster discovered and launched some of the greatest music careers including Michael Bublé, Josh Groban and Celine Dion.  He has created hit songs and award winning platinum and gold albums for Earth, Wind & Fire, Natalie Cole, Michael Bolton, Seal to name just a few.  David performed and hosted his very own, star-studded ‘Foster & Friends’ concerts in Las Vegas to celebrate the music from his career and toured Asia annually from 2010-2012.  David has won 16 Grammy Awards from 47 nominations, and is chairman of Verve Music Group.

Most famous for being a part of the iconic five-member Spice Girls, in which she was nicknamed ‘Sporty Spice, Melanie C. went onto a successful solo career, selling more than 12 million records from six albums she released.  Did you know that Melanie is the only female to top the charts as part of a quintet, a quartet, a duo and a solo artist?  Melanie has also performed in the West End musical ‘Blood Brothers’ in the role of Mrs Johnstone, for which she was nominated for ‘Best Actress in a Musical’ at the Laurence Olivier Awards.  Melanie has been part of a judging panel previously for the talent search series ‘Superstar’.

Born in California where he took classes in performing arts, acting and languages before moving to Taiwan at 21 to build his career.  His breakthrough came with his lead role in the wildly popular hit idol drama ‘Meteor Garden’ and it sequels.  Van Ness Wu and his co-actors of the series formed the pop idol group F4 – now known as JVKV – and released three studio albums.  In 2002, Van Ness turned his attention to his solo career and has since released 7 solo studio albums.  He has had singles collaborating with musicians including Kanye West, Beyoncé, Wang Lee Hom, Kangta and Coco Lee.  Van Ness has also acted in movies such as ‘Three Kingdoms: Resurrection of the Dragon’ and ‘Kung Fu Chefs’.

From thousands of applicants, the four judges must select those who are worthy of stepping up to the semi-final challenge where contestants will face the judging of the AXN audience at home.  Adding to the excitement, the semi-finals and finale will be held at the iconic Marina Bay Sands, Singapore, with the winner being awarded a contract to return and perform live at Asia’s leading entertainment destination.

Asia’s Got Talent will screen on AXN in March 2015.  For more information visit, AXNAsia