THE BEST OF BOTH WORLDS WITH A TABLET AND A SMARTPHONE IN ONE : THE ASUS PadFone S

Can we really have it all, both a tablet and a smartphone in the palm of our hands, giving us the digital world for work and play at our fingertips?  For years now we have been juggling our smartphone and our tablet around in an effort to stay connected but, no longer is that necessary with the availability of the ASUS PadFone S.

We recently put the ASUS PadFone S to the test, and were very impressed with the ease in which we can switch from the small and limited view screen of the smartphone to the larger ease of handling tablet.  The unique two-in-one design gives us the flexibility and best screen option for every scenario and adapts to our needs in an instant.

The PadFone’s innovative docking technology keeps the PadFone S secured in the back of the PadFone S Station when required, but is easily inserted or removed when a change of screen size is in order.  There are no manual clips, no locks and no other holds which can take away from the ease between smartphone and tablet…ASUS engineers took long and thorough research to ensure that the PadFone is secure when in the PadFone Station but also quick and easy to insert or remove.

To deliver ultra-fast mobile data speeds, the featured technology of 4G LTE-Advanced connectivity including Carrier Aggregation is used.  The QI wireless charging support also makes charging the PadFone S easy and convenient.  The ASUS PadFone S is powered by a Qualcomm Snapdragon 801 quad-core 2.3GHz processor so even the most demanding apps can run smoothly.

No more frustration of ‘low-battery’!  The ASUS PadFone S has a large 2,300mAh battery inside which will deliver all-day battery life with up to 22 hours of 3G talk time.  If that still is not enough, the PadFone S Station has an additional 4,990mAh battery that can be used to charge the PadFone S, thus extending your battery life to up to 64 hours of 3G talk time…WOW!  no more scrambling around for the charger or power pack!

Just one of our favourite benefits of this ASUS PadFone S two-in-one design, is the way it uses only one LTE Data Plan.  Whether you mainly consume data on your smartphone or tablet, you no longer have to make that choice – we can now get the most out of our smartphone and tablet as the PadFone S Station uses the PadFone S’s data connection for internet access. 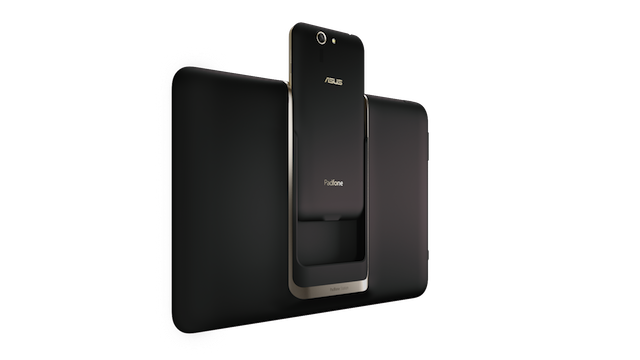 We were a little unsure about this two-in-one design to begin with, having used a smartphone and tablet as separates for some time, change can always be difficult.  But, we truly can say the ease of moving between smartphone and tablet is made simple with the design of both inserting and removing the ASUS PadFone S from the ASUS PadFone S Station.  Of course, using just one LTE Data Plan is wonderful and this really is one of the strong points to the two-in-one design.  Adding to the ease of use and just using one data plan is also the quality, not only the look and feel of the product but also the camera quality even in low-light situations as well as full HD video recording.  Yes, our honest opinion is that the ASUS PadFone S is an excellent choice and is definitely worth considering when looking for a new smartphone or replacement tablet.